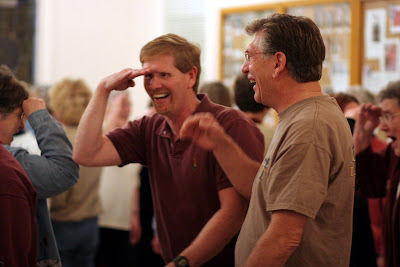 If you want a good laugh, join the club

Iowa members hope there are health perks to be found
from being in stitches.

If you want to finish off Wednesday in a good mood, head to Lansing.

The local Laughter Club is holding its sixth meeting. For half an hour, residents of this northeast Iowa river town will participate in a series of exercises guaranteed to make even the most dour person giggle and guffaw.

"The first time, I laughed so hard I had to sit down," said Avis Davis, 60, unleashing a boisterous chortle just at the memory.

"The time goes bam. You get to giggling and it's gone. It feels so ... oh honey, you just come home feeling like, woo, you really feel good. It makes your whole evening."

The group - apparently the only one of its kind in Iowa - is led by the Rev. Laura Gentry of Our Savior's Lutheran Church.

Gentry said she first heard about the Laughter Club concept, which began in India and has spread from Bahrain to Brazil, from a BBC series called "The Human Face" and couldn't stop thinking about it.

Finally, last year, she approached her church council with a proposal: What if the council members paid her way to Los Angeles over Thanksgiving weekend so she could become a certified laughter leader?

Not surprisingly, they thought it was pretty funny.

"It sounds so silly," Gentry, 36, said. "I didn't experience any resistance. As soon as I got back for my council report, I made them do some laughter exercises. They were sold."

That a sense of humor has serious health benefits is something scientists have been saying for a long time.

The problem? Adults tend to be a pretty humorless lot.

The average adult, according to a study by researchers at the University of Western Ontario, only laughs about 17 times a day.

In 1995, Dr. Madan Kataria, a general practice physician in Bombay, India, set out on a mission to raise the public hilarity level.

He collected a bunch of funny stories and began leading group giggle sessions. Within a week, he was out of material.

His solution was simple: Why not just have club members pretend to find things funny?

Using yoga as a guide, Kataria created a series of laughter "exercises" that mimicked the physical attributes of side-splitting merriment without the jokes.

Although the Lansing Laughter Club is the only Iowa group listed on the organization's Web site, a Quad Cities-area Laughter Club meets in Illinois.

Gentry said the Lansing group, which is free and open to the public, draws as many as three dozen people a week, some from as far as Waukon, 15 miles away. The club has outgrown the church, she said, and next week will move to the Kerndt Brothers Community Center.

In Lansing, club sessions always begin with a greeting exercise. Members exchange handshakes, make eye contact, then laugh in each other's faces. As the night progresses, they may find themselves popping imaginary laughter pills, soaring around the room with their arms extended like laughing airplanes, or snickering like they're in a library and trying not to get caught.

If it all sounds rather, well, childish, that's the point, Gentry said.

"It's playful, and adults just don't get opportunities to play very often," she said. "It's a safe place I can come and be goofy for half an hour, and I don't have to be self-conscious."

The laughter may be a bit forced at first, but watching the expressions on the faces of other participants soon has them cracking up for real, participants say.

In fact, some members report guffawing so hard their muscles ached.

"When you get home sometimes, you're kind of sore in the bottom of your rib cage and your cheeks are sore," said Janet McMillan, who makes the weekly drive from Waukon with her husband, Gary Jones. "I just love it."

Gentry said she warns people that Laughter Yoga is vigorous exercise and chairs are on hand for people who need a break.

"No one's ever died from it, but it would be a good way to go," she said. "I think the bigger risk is not laughing."

Gentry has personal experience on that score. As a high school senior, she said, she was so stressed out she had to take prescription ulcer medicine.

The pain went away in college as she became immersed in dorm life and new friends.

"That's when I kind of made a life decision - I'm a laugher," she said.

Gentry hopes the Laughter Club will help people in Lansing develop more meaningful connections with each other and create a more harmonious community.

At the end of each meeting, she said, participants engage in heart-to-heart laughter. They hold hands, or hug, and laugh together. 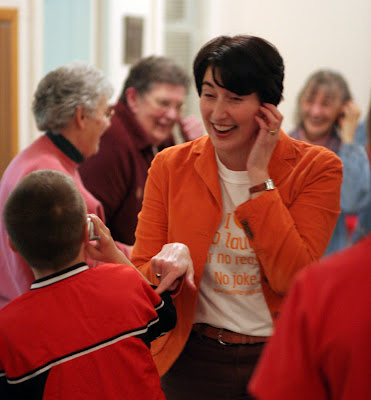 This article appeared on the front page of the Des Moines Register on February 6, 2007
For more press on Laughing Laura, visit the Press & Testimonials page.
Posted by Unknown at 1:42 PM No comments: