THE LAUGHTER BLASTERS CD IS HERE!

I am pleased to inform you that my new CD, Laughter Blasters, has been released! At last, you’ll be able to hear the exciting montage of laughter blasted out along with a jazz trumpet. 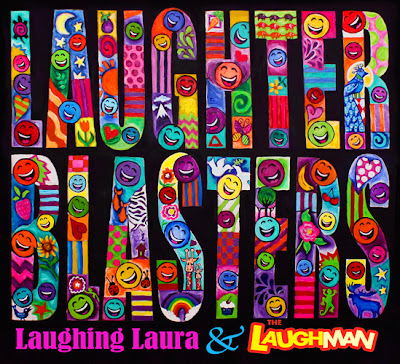 “Against the assault of laughter
nothing can stand.”
So wrote the iconic American humorist Mark Twain. This aptly describes Laughter Blasters.

Cadres of enthusiastic laughers from around the globe have joined forces to bring you this unique collection of zealously blasted laughter.  It features my laughter along with that of The Laugh Man Doug Collins who’s been hailed as the man with the most contagious laugh in the world. His runaway YouTube hit “Dad at Comedy Barn” was played on Good Morning America and to date has over twenty-four million views. If you haven’t seen it, or just haven’t seen it recently, you can watch it at this link. It’s guaranteed to make you laugh!

This project began a ridiculously long time ago when Doug and I formed a laughter friendship via Facebook. We determined to do a recording together. After some deliberation, we decided it would simply be a collection of contagious laughter, since that’s his special gift. 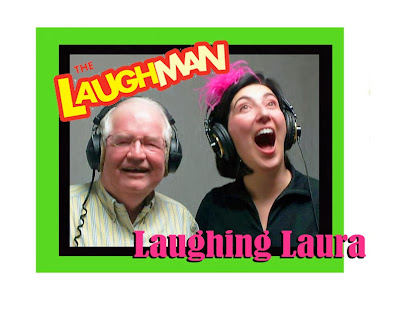 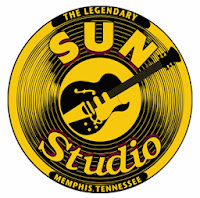 So, I packed my bags and headed down to meet Doug and his wife, Linda,  in Memphis, Tennessee. I asked him if he knew of a good recording studio and said: “How about Sun Studio?” and then proceeded to belt out one of his great laughs.

“Why not?” I replied and laughed right back.

The next thing we knew Doug and I, along with a group of his family and friends, were recording in the legendary studio that’s known as the birthplace of Rock and Roll. Many famous records were made there by artists like B.B. King, Johnny Cash, Elvis Presley, Jerry Lee Lewis, Bonnie Raitt, Def Leppard and U2 (my favorite band in the world). And here we were in that same studio rolling around on the floor laughing our sides out! The whole thing was absurdly funny. But beyond the humor, it was pure delight—you know, one of those perfect “can this really be happening?” moments.


When I returned home I decided to add trumpet music to the mix.  I think laughter and trumpets share a frontier. They both have the capacity to blast with abandon. That, and I love the interplay of music and laughter. I’ve been experimenting with that for a while. I knew that the trumpet music could help bring the various laughter sounds together and make it more fascinating for the listener. So I hired Zak Kaszynski, a young jazz trumpeter. We had him improvise on jazz standards while the sound engineer, Brett Huus, and I laughed. Incredibly, he was able to keep on playing through our shinanigans but every so often, he’d burst into laughter along with us. It was a riot.

I could have stopped there, but I was setting out to make the most contagious laughter album possible so I sought out more Laughter Blasters willing to join the party.

Doug had involved his wife and son, so I decided to get my own family into the project. I put together a recording session with my friend Richard Bruxvoort Colligan in Strawberry Point, Iowa, which included my husband, my dad, his college friend, the friend’s wife, and a friend of ours.

That was great but I was determined to have even more, so I set up another recording session in Madison, Wisconsin at Audio for the Arts Studio.  The objective was to get as many people from the Madison Laughter Club as I could. This organization, you see, has some of the universe’s most enthusiastic laughers. A large gaggle of gigglers showed up for the recording including the four founders of the club, other club members, some of my laughter students from the Madison area, a college buddy of mine, my best friend from the 5th grade, as well as my sister and her kids who made a road trip on a school night to be there. To say it was outrageous would be an understatement! We were able to record everyone’s individual laugh as well as various groups of laughers. Throughout the session, people were falling down and slapping the floor. You can hear this on the CD and see it in the promotional video below. It was unprecedented hilarity. No one could contain themselves at all. On the way home my nephew summed up the evening by telling his mom: “That was really fun. Aunt Laura should do that more often!” 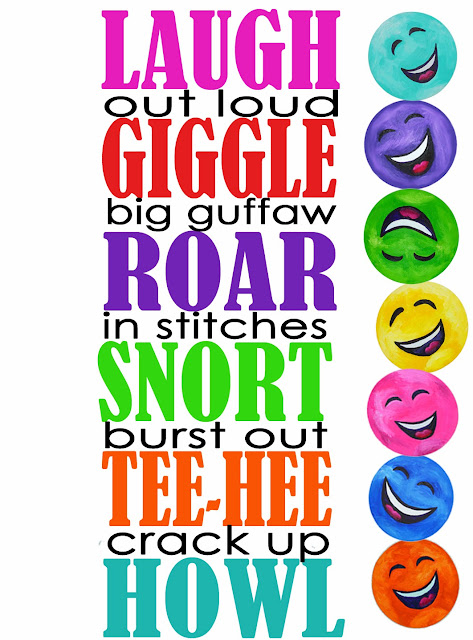 Still, that wasn’t quite enough laughter for me. I set up a few more recording sessions in LaCrosse, Wisconsin. One of them was entirely peopled by child laughers. My niece and nephew were visiting us at the time so they got to laugh on tape again. We also had a five year-old who has been raised on laughter because his grandmother trained with me to become Laughter Yoga Leader just before he was born. His giggles are too precious for words. You can hear them all on the kid-only song “Just Plain Goofing Around.”

We even flew Doug to Wisconsin so we could get more of his amazing laugh recorded. This enabled him to be the keynote speaker at our Spring Laughter Retreat. Needless to say, the whole group fell in love with him and we were all grateful for his joyful presence.

On top of all that, some friends from around the country and Australia, Israel and Chile sent in recordings of their laughter, which we mixed in. I also included a laugh by Carl Kassel of public radio. I had won his voice for my voice mail because I was a contestent on “Wait Wait...Don’t Tell Me!” (click here to see the video of the greeting he recorded for me). All told, sixty-one laughers were involved—the biggest group I’ve ever put onto one CD! I am profoundly grateful to each and every person (whose names are listed below) for they have given an enormous gift by sharing their unique laugh. 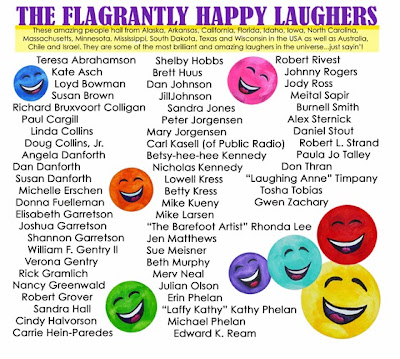 And yes, I painted the cover. I filled it with laughing, happy, random things to make you smile—like an eggplant, peace doves, hearts, stars, flowers, a cupcake, a moose and Mount Fuji!  It took me all winter.  I packaged the CD in an eco-friendly wallet made with certified green components. Woo hoo!

If laughter is medicine, this recording is prescription strength! It’s such a relentless stream of positive energy that no grumpiness can withstand it. In fact, it’s so concentrated, you probably can’t listen to the whole album at once and do it responsibly because you’ll be laughing too hard!

Every one of my productions is precious to me (Laughter Friends, Today is a Laughing Day, Laugh Your Way There, Holy Hysterics, Yoga de la Risa, Be Laughter, Yule Laugh, The Little Book of Big Laughs, Laughter Blasters). They are made with love and I send them out into the world to do their work of spreading world laughter. Yet I can honestly say Laughter Blasters is my new favorite. It was a much longer and more involved process than I expected, but it is worth it because now I have an amazing collection of laughter to share. I think it’s particularly helpful for laughter yoga professionals who don’t necessarily need laughter exercises to laugh on their own, but a bit of recorded laughter helps!


Here is the behind the scenes video, where you can also hear samples from the CD. I'm so excited to share this with you. Get ready to laugh! :)

Like the other discs, Laughter Blasters retails for $14.95. It’s available at CD Baby and Amazon (where the price fluxuates and you can sometimes get a better deal). You can also find them as digital downloads at those sites so you can get it instantly. Right now, I’m running an introductory offer: FREE shipping if you order one CD or you can get a Laughter Blasters Party Pack of 3 CDs for just $30 plus FREE shipping. You can order them below with the handy Paypal buttons or at The Laughter Shoppe where there are some other new offers, too. And with the mail-in coupon below that, you can get the album as a digital download from me for just $5 per card! Once I receive your order, I’ll send you a download card with the code for you to download it from CD Baby. Hurry, this is a limited-time offer (and makes a super Christmas gift that can be tucked into a card)!

introductory offer for a limited time only!