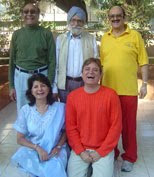 Tomorrow, the global laughter movement will celebrate its 15th anniversary. For it was on March 13th in 1995 that Dr. Madan Kataria and his wife, Madhuri, went to Lokhandwala Park in Mumbai, India and convinced three passersby to join them in their experimental concept of a "laughter club." This group, pictured to the left, had a wonderful meeting that day but had no idea where this group laughing thing was going.
For the anniversary celebration on Saturday, they will gather at the very same spot the club first met. They'll have cake, laugh and reminisce about the humble beginnings of this now international movement of laughter and peace.
About this occasion, Dr. Kataria says: "A number of people have said kind things about me. While I am grateful to them, I must mention that all along it has been a combined effort of laughter club members, especially the leaders and teachers, from all over the world. It will be not incorrect to say that each one has contributed in some way or the other to the growth of laughter clubs while my role has been that of a mere facilitator. Please accept my heartiest congratulations and best wishes for you and your family and may everyone around you be happy, healthy and joyful."
As a teacher of laughter yoga whose life has been swept up in this laughter movement, I must stop and reflect up this anniversary as well. It is incredible to me—almost unbelievable—that 5 people telling jokes in a park could change the world in this epic way. But they did! And they did so without any advertising campaign. In the 15 years since it began, laughter yoga has spread to all corners of the globe primarily by word of mouth. It is a grassroots movement of joy involving hundreds of thousands of enthusiastic laughers, many of whom lead laughter clubs on a volunteer basis.
It is easy to look at the woes of the world and feel helpless. We can get down and say to ourselves: I'm just one person, I can't change the world. Yet the Katarias and their fellow laughers tell us that yes, one person CAN change the world. And this sparks such hope in me that I am overwhelmed.
On Saturday, I invite you to say a prayer of thanksgiving for the global laughter movement. Then throw your arms into the air, let out a great big belly laugh for peace and smile knowing that YOU a part of this movement—this family—and the positive changes have only just begun.
Posted by Unknown at 7:20 AM No comments:

My children's film, Laughter Friends: A Laughter Yoga Workout for Kids, has been chosen to be a part of the Operation Military Kids program. This is the U.S. Army's collaborative effort with America's communities to support the children and youth impacted by deployment. This initiative was officially launched in April 2005. Since its inception OMK has touched 88,000 military youth and provided information to 21,009 community members across the United States.

The University of Minnesota Extension is working with OMK to create Hero Packs to be sent out to 350 US military bases around the world. These are knapsacks filled with a variety of items to help support kids whose parents have been deployed. They are given as "Thank You" for the sacrifices that they make while their parents are deployed. The University of Minnesota Extension will be including a DVD of Laughter Friends in each Hero Pack. They'll be shipping out shortly. 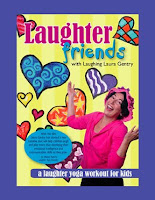 I am delighted that the treasure of laughter yoga will be given to these kids through this film and I pray that it will uplift them and help support their emotional health as they wait for their parents in uniform to return home. Military Kids, we salute you!
Posted by Unknown at 4:10 PM No comments: