This article by Nancy Ngo of the Saint Paul Pioneer Press was picked up by the AP and ran all over the country in October. Since Jody Ross, the leader of the laughter club mentioned in the article, is my student I wanted to bring this great bit of press to your attention. Congratulations, Jody! 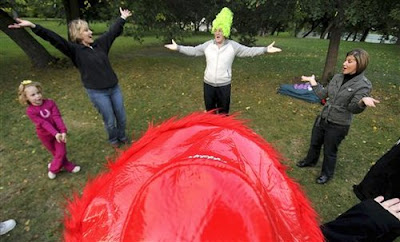 With the growing popularity of various forms of yoga, it was only a matter of time before a practice called laughter yoga made its way to the Twin Cities metropolitan area.

From Roseville to Burnsville, groups are gathering to laugh to their heart's content.

Laughter yoga has been spreading across the globe since a doctor in India created it in the mid-'90s as a way to relieve stress and anxiety in his patients.

The exercise is believed to have health benefits that include strengthening the immune system, minimizing upper respiratory infections and decreasing sleep deprivation.

"It's been clinically proven that when you laugh, you feel happier," said Mary Margaret Anderson, a laughter yoga instructor who teaches at Fairview Community Center in Roseville, Minn.

"People are coming because they realize they can do something about their health and state of being."

Anderson, who has taught several forms of yoga for 15 years, started offering laughter yoga three years ago because she liked how it concentrated on releasing endorphins in the brain associated with happiness.

She believed the practice was a natural complement of other forms of yoga.

The practice is similar to other yoga classes in the sense that it is about focusing on the moment, finding inner peace and improving one's health.

Yet there are no downward facing dogs or other poses. Rather, a session focuses on laughing and breathing exercises.

"You don't necessarily have to be athletic," Anderson said. Still, participants end up strengthening their abdominal muscles and burning calories in the process.

Jody Ross has offered a free outdoor laughter yoga class at Lake Harriet every Monday night since May. The get-together has attracted all types -- kids and seniors, working professionals and retired people.

"I think folks are looking for ways to lighten up. Especially with the economy, there are so many things that can stress us out or give us anxiety," she said. "Laughter yoga is different from hearing a joke or watching a film. It's a type of laughter that affects your body differently."

At Ross' class this week, participants came as they were, including in jeans and a sweatshirt.

The class involved impersonations and role-playing, and participants found themselves needing to be social, lively and interactive.

Ross even brought a bag of props including wigs, hats and feather boas to get participants in a mischievous mood.

Participants also pretended to ride in a rodeo and to blow out candles on a cake. Breathing exercises were also part of the mix.

After suffering a heart attack a year ago, Erv Chorn of Edina, Minn., started attending laughter yoga classes regularly to improve his health.

"I wouldn't have kept coming back if I didn't feel like it was helping me," said Chorn, who's in his mid-70s. "No matter how hard my day has been, how tired I am, I come here and feel relaxed and re-energized by the end of the class."

Renee Taylor, 40, of Maple Grove, Minn., tried laughter yoga the first week of October for the first time. "I showed up with my yoga mat, but I guess I didn't even need it," she said.

Taylor found the exercises contrived at first. As she warmed up, she found herself laughing naturally -- especially when a fellow participant couldn't stop laughing, which she found contagious.

"I liked that it was one of the few times you get to be spontaneous and be in the moment," she said. "By the end, it was the real thing."

* If you are a subscriber to this blog and haven't yet received your 100 free laughter yoga exercises, simply respond to this email and write "FREE" in the heading and I'll send your exercises right away.