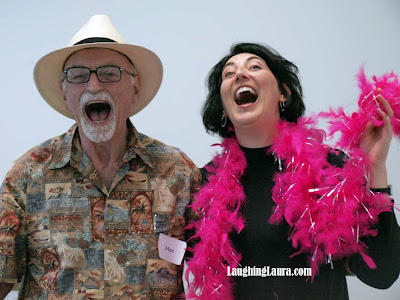 Laughing with an enthusiastic participant of the symposium
Held in April to recognize Parkinson’s Awareness Month, Houston Area Parkinson’s Association offers an educational symposium which includes presentations on the most up to date Parkinson’s related topics at no charge to those who attend. The 2010 symposium took place Saturday, April 24th. This educational program, "Approaching Parkinson's Creatively: New Treatment for a New Decade" gave participants the opportunity to put into practice the innovative, self-determined approaches to managing Parkinson’s.

The symposium held at the United Way of Greater Houston was generously sponsored by Teva Neuroscience and Medtronic. HAPS Board and staff welcomed a "sold out" crowd of 150 participants who browsed the community resource exhibits and filled the auditorium and breakout sessions to experience a series of interactive and creative workshops.

I kicked off the event with an interactive keynote for the whole group. It served as an introduction to the way laughter yoga is yet another creative approach to treating Parkinson’s disease. Because this progressive disorder of the brain causes a variety of movement problems including decreased facial expression, smiling and laughing was a big effort for many of the participants at the symposium. Nevertheless, they DID smile and laugh whole-heartedly. It was a absolute delightful to see such joy errupting from the people gathered for the event. Kathleen Christ, of the HAPS staff, sent me this word of thanks:

“I wanted to thank you on behalf of everyone at Houston Area Parkinson’s Association (HAPS), our clients, board members and especially thos who attended the symposium on Saturday, for your wonderful presentation! We received such wonderful comments and feedback on your session. I saw so many people—people I have known for 8+ years—smiling and laughing like I have never seen before. One person came up to me at the end of the day and said: ‘Kathleen, I had forgotten that I knew how to laugh. Thank you for reminding me!’ Thank you for reminding us all how important laughter is. HAPS sings your praises!” 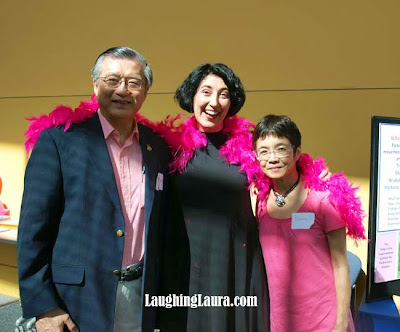 Here I am with some of the other exhibitors 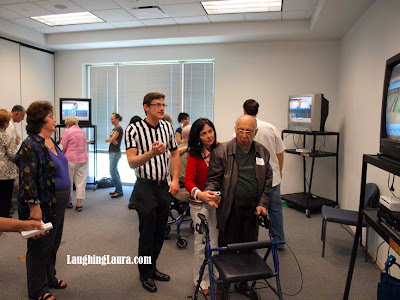 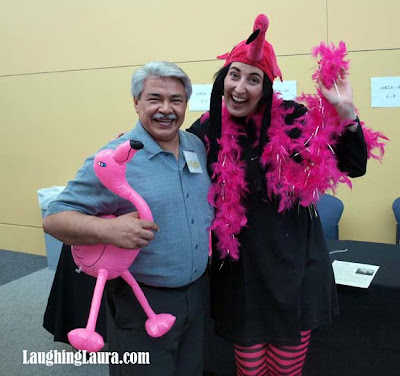 Laughing with Alfonso Hernandez, director of therapeutic programs and community outreach for HAPS 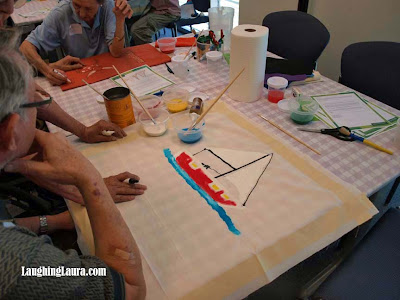 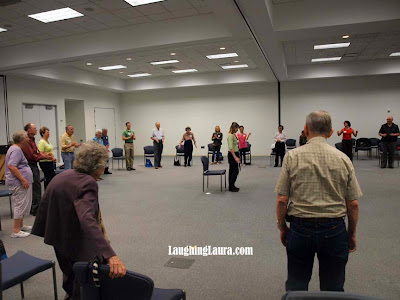 An action shot of a group doing tango dancing as a therapy
Click here and download the May 2010 Newsletter with more information about this event.
Posted by Unknown at 2:34 PM

Two years ago, Lisa Levine-Bernstein and her husband, Ed, flew from New York to Wisconsin in the deep midwinter to take one of my laughter yoga leader training retreats at Sugar Creek Bible Camp. Their friends, of course, laughed at their plans to travel to the Midwest at this time of year—particularly to study with a Lutheran minister in an obscure little town with the funny name of "Ferryville." But Lisa, a yoga teacher, was determined to learn laughter yoga and figured a weekend retreat would be the best setting to fully experience the power of laughter. She brought Ed along and, indeed, we all had a fabulous time. They are pictured below with their graduating class. Lisa's in the back row in black with her arm up and Ed is in the bottom right hand corner wearing a pig nose and bunny ears. 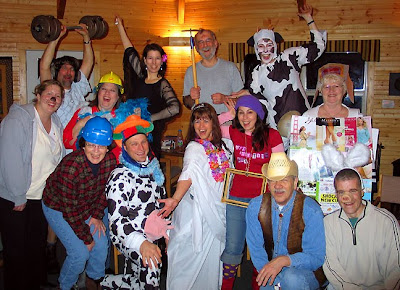 Ever since, Lisa and Ed have been leading laughter yoga sessions in their hometown of Great Neck, New York. Yesterday (April Fool's Day), the following article by Kaitlyn Piccoli broke in the Long Island Press. There's a wonderful video as well at this link. I share this article with you because I am so proud of Lisa and Ed and their great work to spread the life-changing joy of laughter yoga in their Great Neck neck of the woods. YAY! 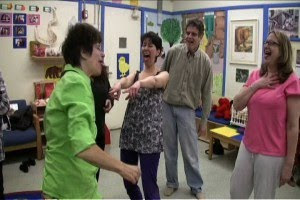 As you meander down the long, quiet corridors of the Great Neck Adult Education Center, you’re reminded of the sounds and smells of elementary school. The muted voices and shuffling of feet that echo down a narrow hall, the arid scent of stale books and wooden furniture. Then you hear laughing. A lot of laughing. Deep, cackling, hysterical laughing. Suddenly, it ceases, and a chant begins. “Ho, ho, ha ha ha,” go the voices, like witches practicing a spell, clapping in unison with each syllable uttered. “Ho, ho, ha ha ha.”

This is not a séance, nor a community production of One Flew Over the Cuckoo’s Nest. It’s a Laughter Yoga class, led by Lisa Levine-Bernstein and her small group of laughing students, including her husband, Ed Bernstien. They run through a series of exercises, each aiming to flex the laughter muscle. The chant and clapping is an interlude between exercises, a way to bring back the group’s focus before they go on to the next laughing round. Grown men and women excitedly wag their tongues, roll on the floor and dance, all while cracking up at themselves and each other.

“We’re a group of professionals acting silly,” Levine-Bernstein says proudly. Her group, which includes a dentist, a Spanish teacher and a mother, looks to this class to relieve the stress from everyday jobs, and escape “normal” life for a little while.

“Children laugh four times as much as adults every single day,” says Levine-Bernstein, who is a registered nurse.
Laughter Yoga aims to close that gap and teach adults to remember how to laugh again. “I realized how much I wasn’t laughing once I took this class,” says Barbara Grapstein, a class participant as well as fellow Certified Laughter Yoga Leader.

Before exploring Laughter Yoga, Grapstein, like many stay-at-home mothers, experienced a period of depression once her children left for college. “I was in a tailspin,” she says. “I never thought I would get out.” She discovered Laughter Yoga and decided to give it a shot, although she admits her skepticism going into it. “I thought, ‘I can’t believe I’m doing this,’” she says. “But you try it, and you like it.” Grapstein has been laughing ever since.

“[Laughing] opens you up; you feel like a flower,” she says. “It’s almost like finding God.” Grapstein’s bold statement reinforces the theory that laughter is not only contagious, but a deeply soul-satisfying activity. It’s more than finding humor in a punch line—its sharing a joyful experience. “It’s like a drug,” she says.

Lisa and Ed stick their tongues out while laughing

Believe it or not, underneath all that fun lies some serious medicine. Laughter releases Serotonin and produces endorphins, which are released throughout the body. Serotonin is a chemical that acts as a natural antidepressant, which helps to relieve anxiety, as well as regulate appetite and sleep patterns. Endorphins act as a natural pain reliever and boost the immune system. Laughter also causes you to breathe deeply, and improves lung function as well as increases oxygen levels in all cells of the body. The physiological benefits of laughter (something that’s legal and costs nothing) seem almost too good to be true.

But there are contradictions to Laughter Yoga. Levine-Bernstein warns that people who suffer from severe high blood pressure, certain heart conditions and those that have recently had surgery should not laugh excessively.

Each class, which includes a range of laughing exercises combined with deep breathing, stretching, and meditation, is relaxing, after you overcome the strangeness of it. And while the benefits of Laughter Yoga differ from one participant to the next, Levine-Bernstein stresses that the experience should always be positive. “You can expect to have fun, and to connect with other people,” she says.

Grapstein is no longer depressed, and has adopted the Laughter Yoga philosophy into her everyday life. Mainly, to never take things too seriously, especially the little things. “I’ll be sitting in traffic and I put on a clown nose,” she says, running to her purse to pull out said nose, along with another squishy toy which she giggles at. “People in cars next to me look at me and smile. You want to catch people off guard,” she says.

And while props and a dose of unexpected goofiness can help to get a chuckle out of a stranger or relieve a tense moment, the real goal is to learn to laugh at nothing at all—kind of like a universal Mad Hatter’s tea party. “Sometimes with jokes, people might not get it, and feel excluded,” Levine-Bernstein says. “Here, we laugh for no reason, so you can’t feel left out.”

A History of Laughter

“Laughter has a long history,” Levine-Bernstein explains. Here’s a quick look at how Laughter Yoga got started:

Mumbai, India, March, 1995—Dr. Madan Kataria came across several scientific studies proving the benefits that laughter had on the human body and mind. In his research, he discovered many modern scientific studies that described in depth the many proven benefits of Laughter on the human mind and body. Kataria was particularly impressed by Norman Cousins’ bookAnatomy of an Illness and the research work by Dr. Lee Berk, who did extensive studies on the benefits laughter had on the immune system. It was also found the human body cannot detect the difference between forced laughter and laughing when something is funny. The physiological reaction is the same regardless. Kataria immediately decided to start a group, testing laughter’s impact on himself and other volunteers.

On March 13, Kataria gathered five people in a public park in Mumbai. They told each other jokes, and laughed as curious bystanders observed. The first Laughter Club was born.

The group quickly grew, but despite the rise in members, it was running out of material. People resorted to telling dirty jokes, much to the chagrin of certain group members. After fielding several complaints, Kataria asked for just one night to think of a solution.

He figured since the body could not tell the difference between pretend and genuine laughter, he would initiate forced laughter, and hope everyone would follow along. It was a great success, as his laughter spread quickly over the group. He developed this theory into exercises, combining them with deep breathing and stretching to form Laughter Yoga as we know it today.

Today, there are more than 400 organized Laughter Yoga groups worldwide, with dozens on Long Island.

Posted by Unknown at 8:54 AM No comments: